Getting lost in the old town streets, sipping mojitos while watching the sun dip inside the sea, having roast meat with baked potatoes in quaint restaurants with red and white checkered table clothes, sipping wine on the boat sailing on the blue clear sea, petting the Greek cats that roam with a free soul on the cobbled streets, checking on the old bookstore at the end of the road where the old man with white hair and wise face sits, running around the blue top churches by the bay in white flowy dresses, savoring each bite of the ham cheese crepes and devouring each slice of the home made Belgian waffles. That is what Greece meant to me.

Since childhood this country has run 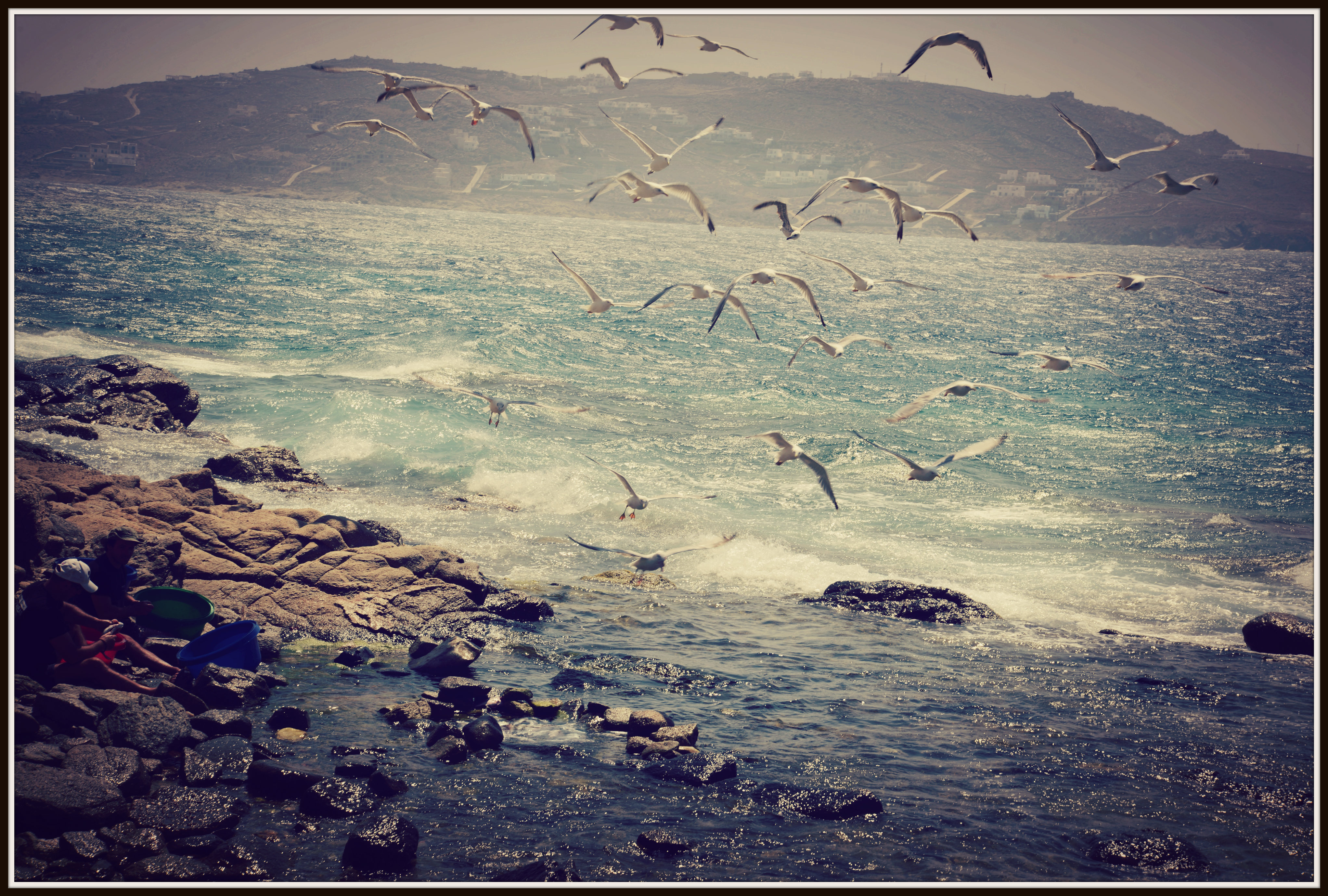 through my veins with mystique and fascination each time I turned the pages of my history book marveling at its long and deep history. I have always wanted to be there among the soil that boasts of beauty, nature and above all tranquility. My dream finally came true and here I present to you my little rendezvous with a beautiful land called Ellada (Greek for Greece)

1. There are only 9 outlets of McDonalds in Greece – Coming from Asia where there is a KFC and McDonalds at every next street, it was a surprise that I hardly sighted any huge fast food giants like KFC, Burger King or MCD.Not that I intended on eating these when there was Greek food around but it was interesting to not find the yellow giant “M” everywhere.

2.Greek fast food means Gyros Pita, Gyros chicken, souvlaki, crepes or waffles – Instead of McDonalds; you will find every other shop selling these food items. Gyros pita is a roll of pita, which contains pork, French fries, mayonnaise, basically all the junk you can think of in one food item. Gyros chicken is the same with chicken instead. Souvlaki is a must try. It can either be chicken or pork and is just meat served with pita bread separately. Every shop also sells crepes and Waffles. Their version is to die for especially when you have so many options. You can have sweet or savory crêpes. Have it with bacon or banana, chicken or chocolate, the options are unlimited.

3.Ouzo is the most popular form of alcoholic drink in Greece- There is an old Greek saying that “ouzo makes the spirit” and this spirit or kefi (KEH-fee) is found in hearty food, soulful music, and the love of beautiful conversations. It is an anise flavored drink that is potent and fiery. It has an alcohol content of about 40% (depending on the brand) but also a high sugar content that delays the release of the alcohol in to your system. Drinkers are advised to use caution because the effects of ouzo will sneak up on you.

4.Most of the food in Greece is homemade- every hotel serves breakfast that is homemade. In fact most hotels are family run and breakfast is a family affair. They make the breakfast then and there and serve you. Right from their marmalade to cakes to ice creams, everything is homemade. Ice cream is referred to as Gelato in Greece mostly and is often fat free with no preservatives.

5.People eat marmalade here and jam is almost non-existent as a word. Bacon in Greece is not cooked to crispy and tastes more like fried ham. Italian food is extremely popular owning to close historical connection of Greece and Rome.

6.The Wifi passwords of most of the places are their telephone number and even though most hotels say they have wifi, there is hardly any Wifi in the room. You will find the best signal only outside your door in the common area. Most restaurants hence lure customers by providing them free Wifi.

7.You cannot flush toilet paper in the toilet bowl- every washroom has this warning. Unlike common practice in Asia you cannot flush down a tissue but expected to throw it in a dustbin. Washrooms are not a big affair in Greece as well. Most of the hotels or houses barring the five star ones have pretty tiny bathroom space with either a small window or none.

8.Everything is blue and white- 80% of the architecture, big or small is painted white with blue top. The rest would be in shades of yellow or white with brown windows. Even the big hotels are in these colors. The Greece flag is also blue and white perhaps why everything is in that colour combination.

9.Almost all cities have an old town, which is a true reflection of the magnificent Greek history. To most travellers, my advice would be to find a hotel in or around the old town, as most of your tourist spots will be there.Look out for the churches as well.They are found almost everywhere even in the middle of a sea.

10.Sunset is just about amazing in every city .The sun is so round, big and fiery. It is a delight watching the sunset in Greece. My personal favorite is Santorini.Couples would love that place, as it is the perfect romantic getaway with the most beautiful sunset ever. Everything is artsy, classy and has an aura of magic around it.

11.There are Greek cats everywhere. Almost every hotel has one or two cats, which live there.

12.Greek men’s fashion is very masculine even with those who are gay-Most men in Greece irrespective of their orientation are well built and sport a thick beard. I hardly came across clean-shaven men.

13.Greece lifestyle is very laid back- Lifestyle in Greece is slightly lazy and chilled out. Afternoon siesta from 3-5 is very important to the Greek people. In one of the hotels, the owner asked all of us to leave the reception area as he needed to go for his afternoon nap. People do not expect you to get up early morning and dinner is often a late affair extending almost up to 11pm.

Greece is definitely a place worth being on the bucket list.I am glad I ticked mine off on that.

⁣#RestaurantReco - Would you dine in a place whe

⁣ Today Indians all over the worlds are celebrat

⁣⁣ Want to know what are some of the popular i